Agencies Work Together to Conserve Soil and Water 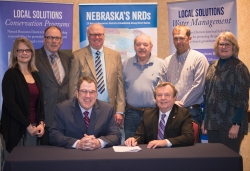 HOLDREGE – The Tri-Basin Natural Resources District (TBNRD) Board of Directors unanimously approved a Memorandum of Agreement (MOA) with the U.S. Department of Agriculture’s Natural Resources Conservation Service (NRCS) on December 10, 2019. This agreement is a renewal of a long-standing commitment between the NRD and the NRCS that reaches back to Dust Bowl era. In 1935 President Franklin Roosevelt signed the Soil Conservation Act. The law was designed, “To provide for the protection of land resources against soil erosion, and for other purposes.” The Soil Conservation Act formed the Soil Conservation Service, which today is called the Natural Resources Conservation Service. It didn’t take long for the newly formed Soil Conservation Service to learn that they needed a locally-led approach to extend conservation assistance to more farmers. The idea of creating local conservation districts was born. The USDA drafted the Standard State Soil Conservation Districts Law, which President Roosevelt sent to the governors of all the states. This law was passed by the Nebraska Unicameral and signed by Governor Cochran in 1937, creating created Soil and Water Conservation Districts. In 1969 the Legislature consolidated Soil and Water Conservation Districts with a variety of other special purpose districts to create Nebraska’s unique system of Natural Resources Districts (NRDs). After the MOA was approved by the TBNRD board it was signed by NRCS State Conservationist Craig Derickson and TBNRD Board Chairman Brad Lundeen. This agreement allows the NRD and NRCS staffs to work together to tackle locally-identified natural resource concerns. Tri-Basin NRD Manager John Thorburn stated that “Nebraska’s NRDs and our federal colleagues in the NRCS have been able to work cooperatively and effectively with our state’s farmers and ranchers to make Nebraska a national leader in soil and water conservation.” For more information about the programs and services available from the Tri-Basin NRD visit www.tribasinnrd.org. More information about USDA-NRCS can be found at: www.ne.nrcs.usda.gov.